Mount St. Helens rises in the distance beyond the city skyline in this northward view from Portland Heights.

After four outings under cloudy and often wet conditions, what a treat it was to do my weekly urban hike in glorious sunshine.

Thursday’s 64 degrees came within two of matching Portland’s record temperature for the date. It may not sound like much to those accustomed to warmer winter temps, but to me it was downright luxurious to hike up and down city streets in a polo shirt and cargo shorts.

I picked out a short hike — Portland Heights to the South Park Blocks to Goose Hollow and up Vista Avenue — knowing I had less time than usual. But I also chose this loop because I knew it would be especially satisfying on a clear day. 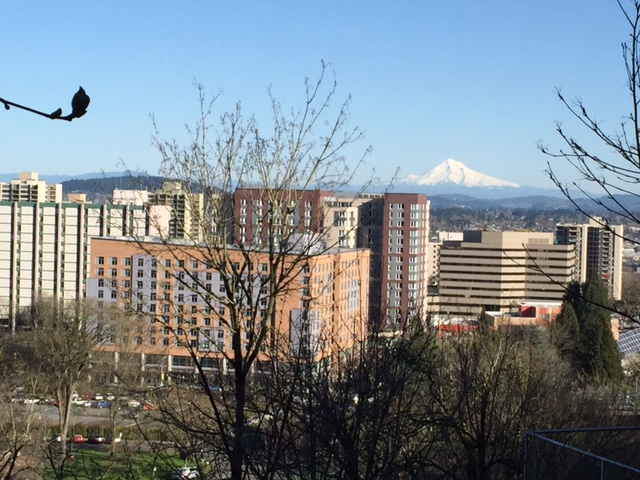 The hike began near Ainsworth Elementary School in Southwest Portland and took me on residential streets I’d never been on before, providing views of Mount St. Helens and Mount Adams in Washington state; the city skyline, from the distinctive arch of the Fremont Bridge to familiar office buildings downtown; and Oregon’s most iconic peak, Mount Hood, on the eastern horizon. 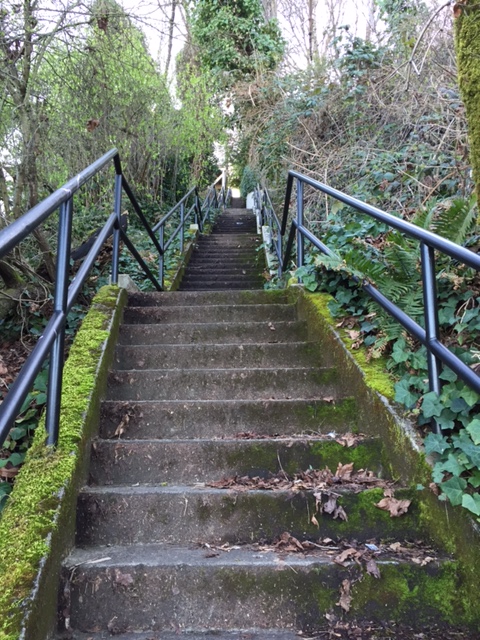 Took this staircase from SW Market Street up to SW Prospect Drive.

The loop took me down to the South Park Blocks and the Portland State University campus, bringing me within a block of where I used to work downtown; through Goose Hollow and up a concrete staircase I never would have discovered on my own; and back up Vista Avenue, past a succession of mansions and grand homes originally occupied by many of the city’s leading businesspeople and professionals. 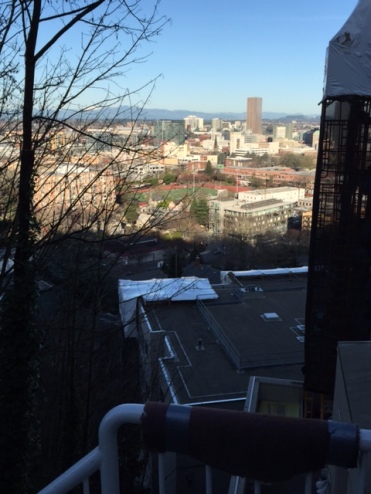 A view of the Lincoln High School athletic field from Vista Avenue. 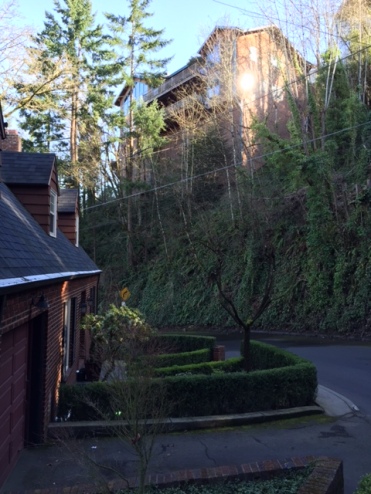 Portland Heights is the essence of affluence. 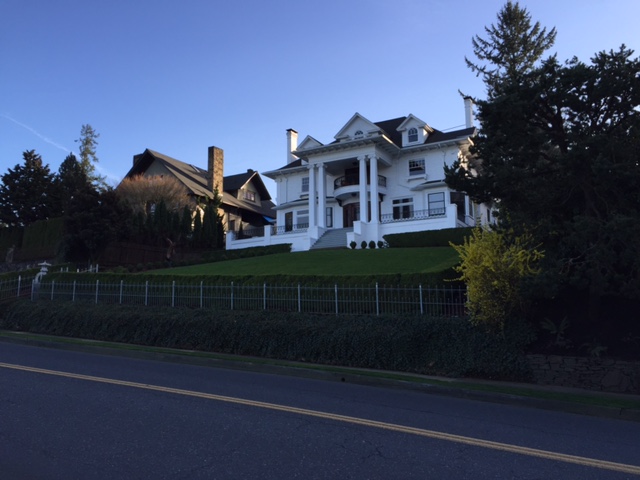 One of many mansions and grand homes along SW Vista Avenue..

Today Portland Heights reeks of affluence. It’s a BMW neighborhood and many of the homes are built into the hillsides, sometimes on seemingly precarious foundations. This is a primary attendance area for Lincoln High School, widely viewed as the city’s most academically rigorous public high school, and attended by the sons and daughters of doctors, lawyers and other professionals.

I don’t say any of this with jealousy or resentment, but simply as an observation. It’s remarkable, though, that these stately homes — on streets named Elm, Laurel and Myrtle — are situated in a compact area not far from scruffy Burnside Street and two freeways (U.S. 26 and I-405). 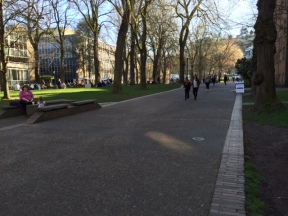 The PSU campus is situated at the south end of downtown. 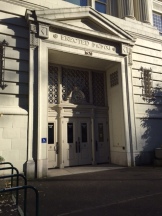 Lincoln Hall, built in 1911, is one of the oldest buildings on campus. 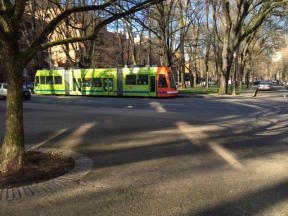 A Portland Streetcar glides quietly through the north end of the PSU campus.

The most eye-opening aspect of the hike? Ambling down SW Cardinell Drive, a street that snakes down a hill to the PSU campus, and enjoying views of the city skyline while passing ostentatious homes that defy easy description.

Thanks once again to Laura O. Foster and her marvelous book, “Portland Hill Walks,” for providing the inspiration to get out and about in my own city. 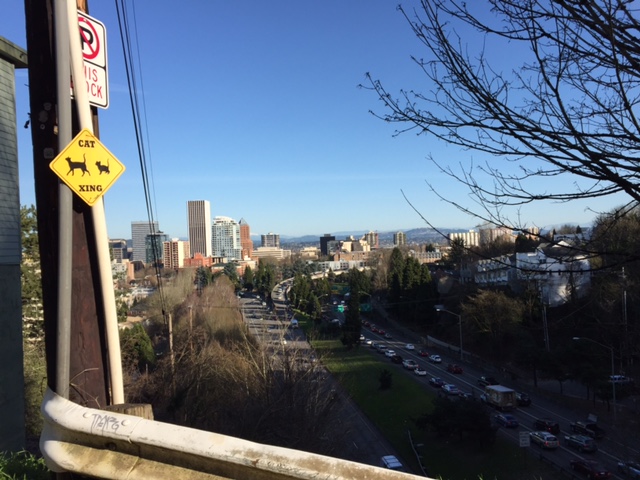 From SW Prospect Drive, a great view of traffic on the Sunset Highway. 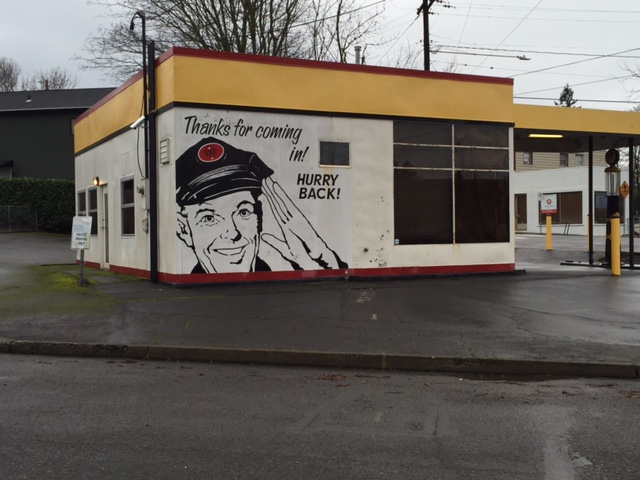 A former service station on SW Capitol Highway in the heart of Multnomah Village.

With a full belly, a bottle of water and a first-rate guide book, I set out today under concrete skies to establish a new routine: a weekly walk or hike, preferably in an area unfamiliar to me.

I had with me a copy of “Portland Hill Walks,” a guide to 20 explorations in parks and neighborhoods written by Laura O. Foster. Filled with maps, photos and short essays detailing the history and landmarks of each hike, it is an indispensable resource and one I plan to refer to regularly. 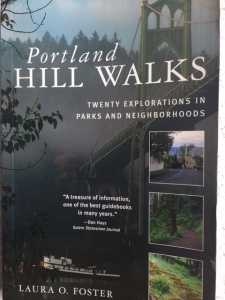 When the year began, I resolved to do more of two things: 1. Get out of town. 2. Try new things.

Well, I didn’t leave the city limits but I did cross the river to a destination 8 miles from home and I did try a new thing.

Today’s walk took me to Southwest Portland, a 3-mile route beginning in Multnomah Village and looping through the Vermont Hills.

The walk started and finished in Gabriel Park, 90 acres of open space with baseball, softball and soccer fields; basketball, tennis and volleyball courts; a skatepark, off-leash area for dogs, walking paths cutting through a grassy meadow and, most surprising, a wetlands area with western red cedars and a footbridge over a creek. 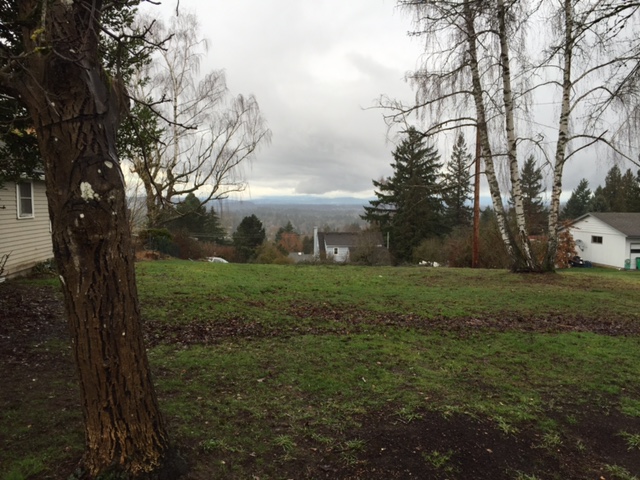 (Full disclosure: Actually, the morning began at Marco’s Cafe and Espresso Bar. Hey, the book recommended it under nearby Food and Drink. What’s an obedient reader to do?)

Anyway, it was a great start to my new weekly activity. 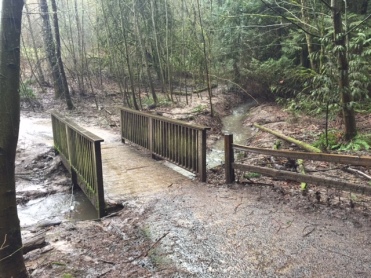 Who knew Gabriel Park had a wetlands area? 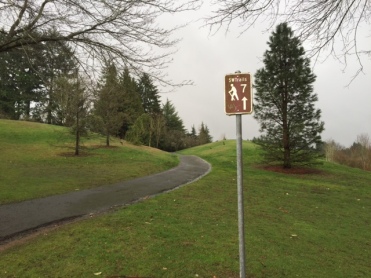 Paved paths meander through the grassy expanse of Gabriel Park.

In a city with nearly 300 parks and natural areas, most residents can probably name their own neighborhood park as a favorite. By using “Portland Hill Walks” as a guide, I can not only familiarize myself with these little gems, but I can also get some up-and-down exercise too.

Today’s walk took me up and down residential streets, curving through quiet, well-maintained neighborhoods with signs of whimsy, creativity and casual comfort. 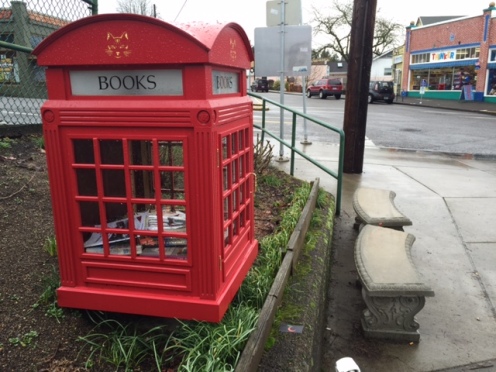 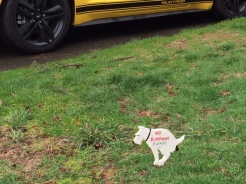 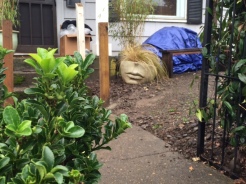 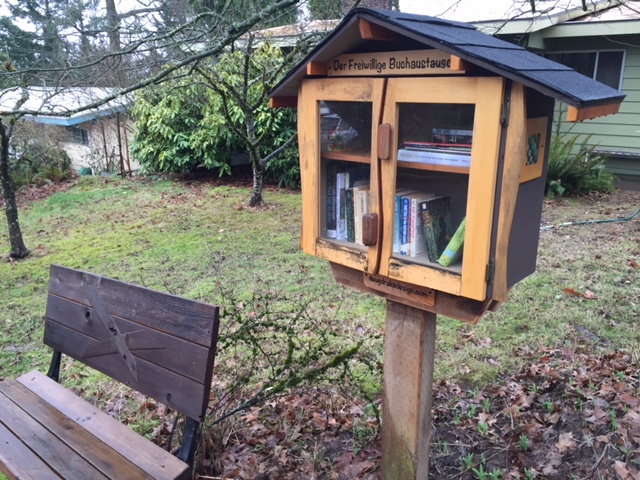 This being Oregon, I walked in a mist or light drizzle some of the time, dodged several mud puddles and spied other people out for a run or walk.

I also met one four-legged resident, a big ol’ Black Labrador named Louis, who was taking his human for a walk on Southwest 32nd Avenue. 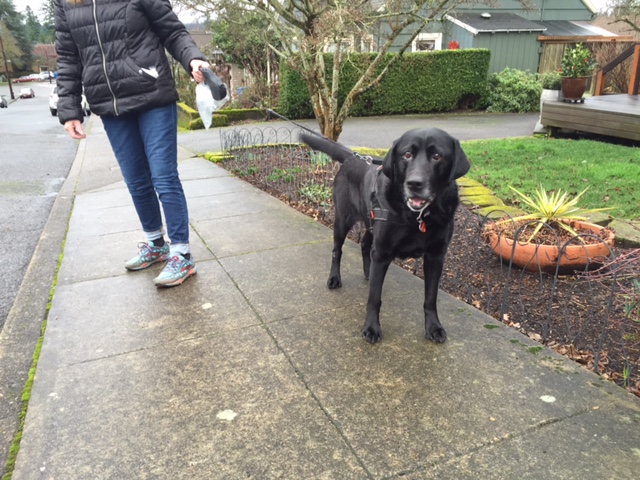 Louis, a 12-year-old Black Lab, takes his human on a walk.

Typical of his breed — and reminiscent of our own Max — he was friendly, wagging his tail as he approached.

Fresh air. Low-impact exercise. New sights and scenes. What’s not to like?