Ora enjoys her ride on the Portland Aerial Tram, rising 3,300 feet above the city.

Before Mother’s Day fades into memory,  let me take some time to express thanks, love and appreciation for my stepmother, Oralia Caballero Rede.

Earlier this month, Lori and I had the pleasure of hosting Ora in the days leading up to and following the wedding of our oldest son, Nathan. She arrived on a Friday evening and left at midday Tuesday, staying next door in the basement studio of a neighbor who makes the space available as an airbnb rental.

It was a great arrangement and we thoroughly enjoyed Ora’s visit.

Ordinarily, she would have stayed with us, but we had to save the one spare bedroom for our youngest son and his family, who would be arriving the next day and leaving the same morning as Ora. It all worked out fine, with just the right amount of privacy for Ora and the peace of mind of knowing she was literally a minute away around the corner.

But on to the main point for this post… 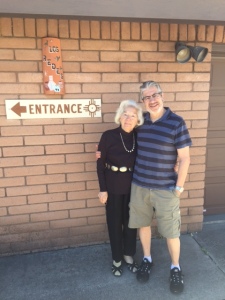 We invited Ora to come out for the May 6th wedding, knowing it would be a rare opportunity for her to see all three of our adult children and meet her great-granddaughter, as well. Though we are lucky to have both Nathan and daughter Simone here in Portland, Jordan lives in the Midwest and will soon relocate to upstate New York for graduate school.

These days, it takes a special occasion like a wedding to bring all three kids and their life partners together. After the wedding, who knows when all three couples (plus us) would be in the same place again?

Ora was reluctant at first, not being particularly fond of air travel. But gentle persistence won her over and, at age 84, she got up early one morning and drove “only” 200 miles from her home in southwest New Mexico to the airport in Tucson, Arizona, where she could catch a direct flight to Portland.

Since my dad died about a year ago, Ora has dealt with the loneliness of a widow who lost her husband of 46 years. Slowly but steadily, she has reintegrated into the community in Silver City,  the small town where they retired after leaving the San Francisco Bay Area in the late ’80s.

Dad and Ora came to visit Lori and me in Bend, Oregon, in the years before we had kids. Photo is circa 1977 or 1978. “Your father always had his arms around me,” Ora says.

Aside from daily walks and frequent lunches with friends, Ora volunteers with various community organizations, sings in the church choir, and tutors two Spanish-speaking priests who want to improve their English. This summer, she’s making plans to travel to Honduras as a part of a medical mission — the perfect role for a retired registered nurse who’s bilingual.

I’ve always admired Ora’s selflessness, whether it was donating time and skills to her community or giving up all her activities in order to take care of my dad full-time as his health declined in the last year of his life.

Having her visit here in Portland gave us all a chance to give back to her with all the affection and attention she deserves.

On Friday night, we had Ora to ourselves for a traditional Mexican dinner of tamales, refried beans and Spanish rice.

Saturday, she was with us as we joined the family of our newest daughter-in-law, Sara, for lunch a day before the wedding. At the same time, we celebrated Nathan’s birthday two days late. A special moment came when Ora, spontaneously, asked Nathan if she could sing him a song: “Las Mañanitas,” a traditional Mexican birthday song. 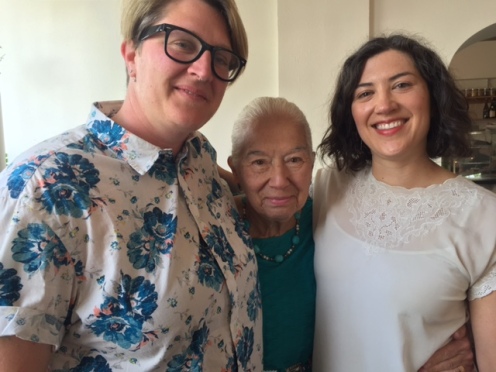 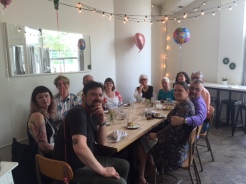 A delicious lunch for both families on May 5th, the day before the wedding.

Those two have always had a special relationship, and it was evident when Nathan got up from his chair at one end of the table and came over to the other end to give his grandmother a hug.

Later that day, we took a walk in the neighborhood with Ora, daughter-in-law Jamie and granddaughter Emalyn. Ora marveled at the vibrant colors of all types of flowers, as well as the variety of architectural styles, as we went from block to block. “The whole city is like a garden!” she proclaimed.

Grandma Ora, with Jamie alongside, encourages Emalyn to climb aboard the mosaic lizard at Irvington School. 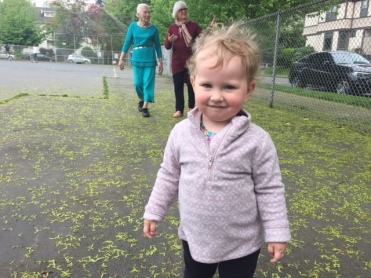 Emalyn, at 1 year and 10 months, walks ahead of her great-grandmother Ora and Nonni Lori.

We went to the school near our home and ran into fellow dog owners whom we’ve come to know. Ora stepped right in and spoke in animated Spanish to Arturo, originally from Barcelona, and his American wife Lindsey, who also is bilingual.

That evening, Simone and Kyndall joined all of us for another family dinner — this time it was Lori’s lasagna — and we spent more time catching up on each other’s lives.

On Sunday, the ladies all went out together to have their hair, nails and faces done ahead of the wedding. That evening, we arrived at the wedding venue — Victoria Bar, not far from the North Mississippi Avenue Historic District — and mingled with guests indoors and outdoors.

Ora, I swear, was like a magnet. While Lori and I danced, drank and nibbled on appetizers, people of all ages and gender identities engaged Ora in conversation, as if she were a longtime Portland resident. At one point, seeing her on the patio engrossed in one-on-one talk with a young woman, I almost felt like an intruder when I approached to check in on her.

Everything was fine. They went on to exchange phone numbers.

It was pretty special (there’s that word again) having Ora as the sole grandparent, and the only person of her generation at the wedding.  It was lovely to see her and Nathan share another emotional moment near the bar. 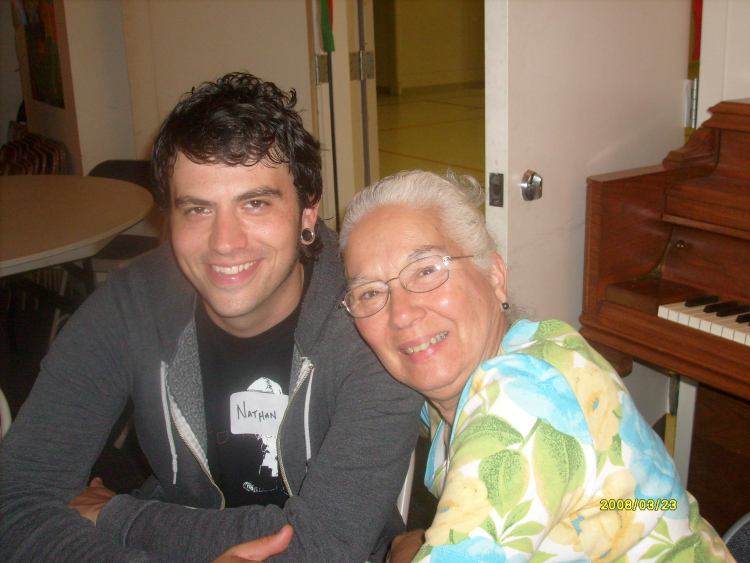 Nathan with Grandma Ora during the Rede family reunion, held in July 2009 in Portland. As the oldest grandchild, Nathan has always enjoyed a special bond with her.

On Monday, friends of Jordan and Jamie came over to see them, so I took the opportunity to sweep Ora out the door and onto the Portland Streetcar.

We rode across the Willamette River into Northwest Portland, made a pit stop at Powell’s Books, hopped on again and rode through downtown and the Portland State University campus.

We got off in the South Waterfront District, where we had lunch and then clambered aboard the tram to the Oregon Health & Science University campus. She loved it all — the ride, the aerial views and the cluster of medical buildings atop Pill Hill. (Of course, she would. She’s  a retired RN!)

Wouldn’t be an outing without a selfie. 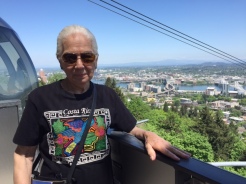 Portland, Oregon, spreads out in the distance behind our visitor from New Mexico.

On Tuesday, we said a reluctant goodbye to our easygoing guest and I drove her to the airport to catch her noon flight. I appreciated the time we all spent together and felt truly grateful that she brought my dad so many years of love, loyalty and companionship.

She drew my dad out of his comfort zone by exposing him to the arts, music and foreign destinations he likely would not have sought out by himself. They traveled together to so many places — England, Spain, Italy, Hong Kong, Costa Rica, Israel, South Africa — and yet were so grounded in Silver City.

I’ve told Ora more than once that Dad truly seemed “born again” as a result of their courtship and marriage. She’s a remarkable woman, and no one knew that better than Dad.

Want to know more about this amazing octogenarian? Read “Shoutout to Ora”

One thought on “Grandma Ora rocks it in Portland”