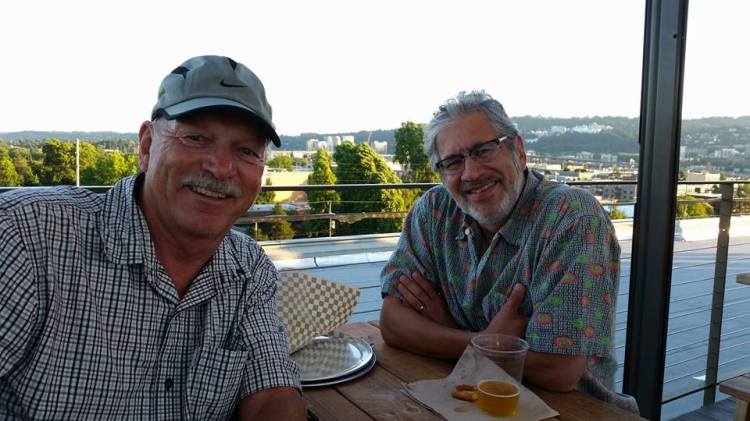 Bob and George enjoy a pre-concert beer on the roof of the former Washington High School in Southeast Portland.

This week brought the opportunity to hang out with with a longtime friend over a couple of beers and then enjoy a ZZ Ward concert at Portland’s Revolution Hall. My buddy Bob Ehlers and I were among a sold-out crowd of 850 who enjoyed a 90-minute set by Ward, described on her website as a “Fedora-rocking, guitar-shredding, harmonica-wielding blues siren.”

Yeah, a little overstated, but there’s definitely some talent there. ZZ plays guitar and keyboards and a damn-good harmonica. She also sings (duh) and writes her own lyrics.

If you don’t know her, ZZ is Zsuzsanna Ward, a Pennsylvania native who grew up in Roseburg, an Oregon timber town, and is now based in Los Angeles. Thursday’s show was part of a national tour to support her just-released second full-length CD called “The Storm.” Already, the CD has risen to No. 1 on the Billboard Blues Albums chart.

ZZ played more than 20 songs, delivering a high-energy performance that had dozens of young people in front of the stage dancing and jumping up like human pogo sticks. She attracted an all-ages crowd, so Bob and I fit in just fine. 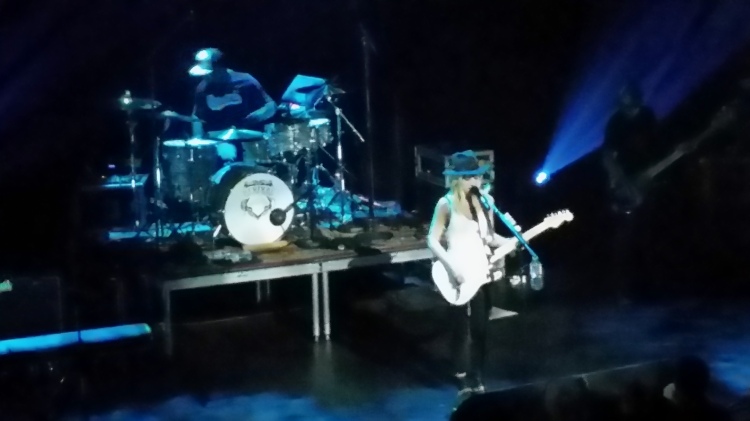 Roseburg’s own ZZ Ward rockin’ the house at Revolution Hall.

ZZ is billed primarily as a blues artist, but her music incorporates hip-hop and, in my mind, makes it really hard to slot her into a single genre.

I’d heard a few songs of hers on Pandora and was intrigued enough to check her out in a live show. ZZ is nowhere near the level of Susan Tedeschi, an accomplished blues guitarist and vocalist, but she’s got potential and I definitely felt I got my money’s worth.

Check her out and see if you agree:

Before the show, Bob and I spent a couple hours at a rooftop bar, enjoying the great view on a perfect summer evening. The concert venue is actually a refurbished high school auditorium housed in the former Washington High School in Southeast Portland’s Buckman neighborhood.

There’s a ground-level brewpub, plus another bar on the second floor, the auditorium on the second and third floors, commercial offices and community meeting rooms scattered throughout the four-story building, and lots of room on the roof to have a drink.

Just as the McMenamin Brothers have turned other schools and absolute buildings into thriving restaurants and brewpubs, so too did a private developer convert this tired old building into something imaginative and vibrant.

The grounds also feature an old athletic field that now serves as a dog park. In fact, this is where my little dog and I were attacked by a couple of unleashed big dogs during a visit here late last year.

On Thursday, a couple of dogs were there with their owners. Seeing them romping around on the grass made me feel a little sad, wishing I could bring Charlotte back for a visit.

On the other hand, I left feeling good about introducing my friend to a new venue and a new artist. Good food, good beer, good conversation, good music. Hard to beat.