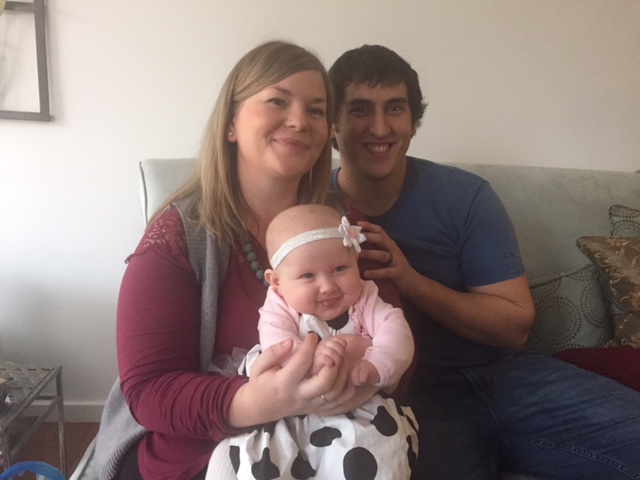 Proud parents Jamie and Jordan with their animated daughter Emalyn.

Technically, it was just a four-day break from Thanksgiving through the weekend. But it felt longer — and for good reason.

We had not one but two visits during the break from youngest son Jordan, daughter-in-law Jamie and granddaughter Emalyn. The trio arrived Tuesday night, marking the first leg of their roughly 400-mile road trip to see Jamie’s family in southern Oregon. They hit the road early the next morning but on their return home, they stopped in again Saturday to spend the night. 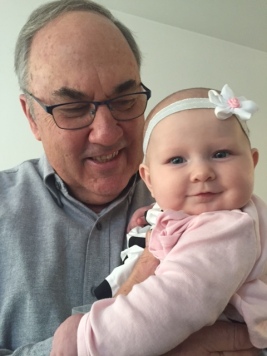 Emalyn May Rede: Is there a happier, more content baby anywhere?

In between, there were movies and a board game, trips to the doctor and a veterinarian, a fabulous holiday meal for two, a visit from other family members, and lots of “homework” for yours truly tied to the near end of my first term teaching a full-time class at Portland State University.

All of this activity made for a stretch of days marked by relaxation and good eating, medical peace of mind, and a last burst of effort needed to prepare for my last two classes and final exam in Media Ethics.

Where to begin? I suppose a chronological approach will do just fine. And if this is TMI, my apologies. Thanksgiving is my favorite holiday and being around people I love is the reason why.

Tuesday: The kids arrived late at night, following a long day at school for Jordan. (After final exams next month, he’s just one semester away from completing an undergraduate biology degree and entering the world of work.)

Tuesday also was the anniversary of Jordan and Jamie’s wedding seven years ago. (So proud of these two.)

Believe it or not, Tuesday also was the day Charlotte and I were attacked by a couple of unleashed dogs at a local dog park. (See below for status update.)

Wednesday: Lori and I both worked, but treated ourselves to a first-run movie at the Hollywood Theater. “Moonlight” has been getting rave reviews for its portrayal of the humanity not often seen in films about African Americans. I can see why.

The director, writers and cast are all black, and the film crackles with emotional authenticity.

Imdb.com distills the plot well: “A timeless story of human connection and self-discovery, Moonlight chronicles the life of a young black man from childhood to adulthood as he struggles to find his place in the world while growing up in a rough neighborhood of Miami.”

It’s a serious movie about bullying and survival, relationships and resiliency, and the yearning to be seen and loved for whom one is. I liked it a lot.

Thursday: Lori worked her magic in the kitchen, roasting a turkey and preparing delicious side dishes that provided meals for the next few days. I helped, but all credit goes to Lori, who is a wonderful cook, just like her late mother.

We hauled out Blokus, a board game we hadn’t played in a long time, to help pass the time on a rain-soaked afternoon. After dinner, we watched a movie in the comfort of our home — “Jobs,” the biopic of Steve Jobs’ rise from college dropout to business/technology genius as the head of Apple.

Ashton Kutcher was surprisingly good in the lead role, capturing Jobs’ brilliance as well as his unlikable, uncompromising personality. This movie was the 2013 version. Not sure I’m all that interested in the 2015 version, but who knows?

Friday: I went to the doctor to see about these dog bites I incurred three days earlier. The cuts on my right arm and left hand seemed to be healing just fine on their own, the nurse practitioner said. She filed a report with the county animal control office about the bites, but since we have no idea who the owner is, there’s no one to hold accountable.

I dove into two stacks of papers written by my students. One, a mandatory assignment; the other, an extra credit option. Both kept me busy through the day and into Saturday.

Saturday: We took Charlotte to the veterinarian’s office to get her checked out, too, a day after Lori discovered what I had missed. Turns out Charlotte sustained a bite just an inch away from her tail. We hadn’t seen it because of her black fur and because it had begun to scab over so quickly.

The vet prescribed some antibiotics and another medication to help the wound heal, and called our little dog both healthy and lucky to be alive. As you can imagine, Charlotte got some extra love these past days, along with more than a few morsels of turkey.

Sunday: After a nice breakfast with Jamie and Jordan, we had Lori’s brother, Jim, and our sister-in-law, Judi, come over to see the kids and meet Emalyn. It’s hard to imagine a baby that’s happier and easier to care for than Em. She smiles all the time, sleeps soundly and regularly, and travels well, her parents say.

Jim and Judi, who have six grandchildren themselves, were suitably impressed by Miss Emalyn, as was our next-door neighbor Monica, who also came over and declared herself “smitten.”

Tummy time provides a great vantage point for a close-up.

Judi and Jamie are mesmerized. Emalyn clearly is not.

I spent the afternoon tackling my next assignment — preparing the final exam for my 35 students. The two-hour final is scheduled for next Tuesday, December 6.

Once the tests are scored and the grades are officially submitted to the university, I can look forward to a break before diving in again with a new class on Media Literacy in January at PSU and two more communications classes at Washington State University in Vancouver.

I will be a busy man.

One thought on “Giving thanks at Thanksgiving”