She was nine months old when we met. A petite, greyish-brown tabby showcased at Petco during one of their adoption weekend events. I signed the papers and knew as soon as I put her in the car she was the missing piece.

When I released her in my apartment she cautiously stalked around sniffing electronics, the people, and then coming back to me. Gus, my playful large white shorthair was relegated to the bedroom while she explored. He wanted to play with her, but she would have nothing of it. (Eventually he figured out she would play with him as long as he stayed under the couch’s slipcover. The game was over as soon as he showed his face.)

She came with the unfortunate moniker “Stripes,” so while she explored I tried different names on her. In the end, she was Claire. A light bringer.

A month after Nike brought her home, Claire sleeps through her new owner’s bachelorette party.

Where Gus was playful, Claire was more reserved. Where Gus was reserved, Claire would crawl in your lap and purr. Together they were the perfect cat.

Claire saw me through the two months I lived alone between my roommate moving out and my wedding day. She was there when I returned from my honeymoon. But she also was a master escape artist. I spent countless hours looking for her over the course of six years before throwing my hands up and deciding she could be an indoor/outdoor cat – so be it!

She yowled through no less than four road trips to and from Eastern Oregon and endured six moves over eight years, including an accepted four-month stay with my brother while we bought a house. Her cries while we all grieved Gus’ tragic loss haunt me to this day.

This sweet kitty sat in my lap as I wrote papers and completed my bachelor’s degree. She was a comfort during my two years of clinical depression and bore witness to hidden hurts and healings. Ever the faithful lap cat, she grudgingly welcomed my firstborn and more graciously accepted the second. She saw me become an adult in my own right. 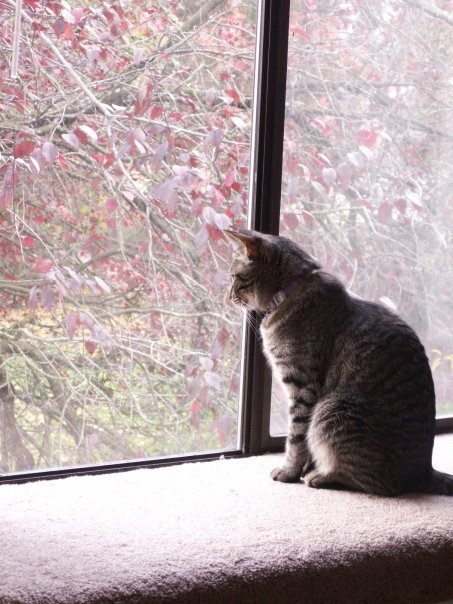 My love for her was more mature than it was for my childhood cat, Patches, who was also wild at heart but less snuggly. Claire was affectionate so it was easy to bond, but I had also grown to embrace Robert Heinlein’s mantra, “Women and cats will do as they please and men and dogs should just get used to the idea.”

It took me twenty years, but I finally accepted that you never truly domesticate a cat. Cats love adventures.

Perhaps it was that growth in me that kept me from pushing the issue when she refused to come in one night.

I had a business dinner and arrived home late. Claire met me in the driveway and walked me to the door, happily chatting all the way. When I held the door open for her and asked if she was coming in she meowed a “Nope!” and took off across the yard. My husband was also working late so I went to bed. Claire wasn’t there in the morning.

To lose a pet to a grand adventure, what I often call “a walkabout,” is a strange thing. You’re unsure when or how or if you should grieve. For three weeks I called for her morning and night. My husband and daughters canvassed the neighborhood and inquired at shelters to no avail. I mapped the most direct route from our house to our friends’, holding on the frail hope that maybe, just maybe, she decided she liked Boring better than Troutdale and estimated she would arrive in roughly ten and a half days on their porch.

More than two months have passed since I last saw her middle-aged chubby face. I have quietly accepted she made her choice and whatever fate befell her she was doing what she loved most – running wild. It’s a small comfort, but it doesn’t fill the void in our home her absence has brought. But, given a choice, I’d still choose to lose her to a walkabout than watching her slowly decline or have a sudden and tragic accident.

My memories of Claire aren’t marred by sickness or death’s cold grasp. The uncertainty allows for imagination, and imagination allows me to believe she’s on an expedition working towards solving our mole problem once and for all.

Nike Bentley is a wife, mama, and friend. An Oregon native, she enjoys hiking, harvesting fresh produce, and wearing fleece jackets while eating an obscene amount of s’mores.

Editor’s note: When I taught my first weekend seminar at Portland State University, Nike was among my students. I enjoyed having her in class and even more so have enjoyed seeing her become a college graduate, a mother and a valued employee of a nonprofit health foundation in Portland.