A Portland visitor on the Cincinnati riverfront.

First impressions can validate a gut feeling or they can be wildly misleading. In the case of Cincinnati, if my visit last week had been a first date, I’d be very open to a second one.

As with Cleveland the day before, I spent less than 24 hours in Cincinnati, barely enough time to form snap judgments. But since that’s all I’ve got to go on, my quick take amounts to this: Cincinnati is, on the surface, an appealing place with lots of hills and trees, a dynamic riverfront, a mix of gleaming and tattered structures, gourmet restaurants, and a historical legacy centered on its location directly across the Ohio River from Kentucky, a slave-holding state.

The Cincinnati skyline, viewed from the southern shore of the Ohio River.

Dubbed The Queen City because of spectacular growth in the years after its founding in the late 18th century, Cincinnati later became a major center for the Underground Railroad for slaves fleeing to the north. Yet, race relations, racial profiling and police brutality have been an issue, as they have in most U.S. cities, and I saw distressed areas north of downtown where large numbers of African Americans live in substandard housing amid few thriving businesses.

The city was wracked by a four-day riot in 2001, the largest in the U.S. since the 1992 Los Angeles riots, and last year drew national attention when a white campus police officer shot an unarmed black man after a routine traffic stop. (Of course, so did Cleveland, when a cop fatally shot Tamir Rice, a 12-year-old holding a pellet gun.)

In short, Cincinnati is an intriguing place I’d like to see more of.

I rolled into town just before 1 p.m. Friday, following a 250-mile drive that cut diagonally across Ohio, from the industrial Northeast to the more rural Southwest and passed through Columbus, the state capital.

It was Day Four of my five-day baseball road trip that took me to three major league stadiums in Pennsylvania and Ohio. I’d never been anywhere near Cincinnati but I had plans to reconnect with a friend who’d worked with me at The Oregonian and to meet a fellow blogger I’d only known through online correspondence.

Had he been in town, I most certainly would have spent time with Peter Bhatia, my former boss at The Oregonian and now editor of The Cincinnati Enquirer. Unfortunately, work required him to be in Chicago.

And so the visit began at Arnold’s Bar and Grill, the city’s oldest tavern, established in 1861.

I met Rachel Lippolis for lunch, finally coming face to face with someone who’d first come to my attention when I was first exploring the blogosphere. I came across her blog and was impressed with her intelligent writing and choice of topics, ranging from literature to politics to baseball. 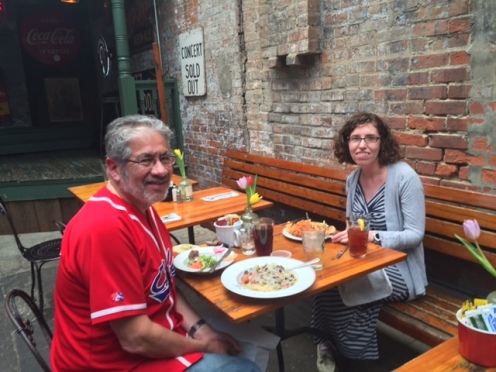 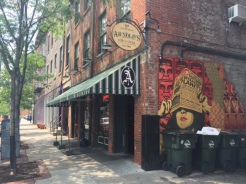 Arnold’s Bar and Grill, the oldest tavern in Cincinnati, established in 1861. 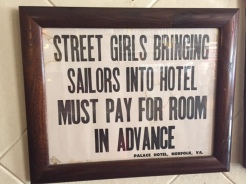 A sign for customers on the wall of Arnold’s Bar and Grill.

She’s a librarian, quiet by nature, married and newly pregnant, and a native of Cincinnati. She’s been a contributor to my Voices of August guest blogging project from the start, and I anticipate she will write something for our online community once again this year. Nice to put a face to a name.

On Rachel’s recommendation, I headed to the riverfront and was dazzled by what I saw. From my vantage point facing south, I could see on my right the football stadium where the Bengals play and, to my left, the Great American Ball Park that is the home of the Reds. 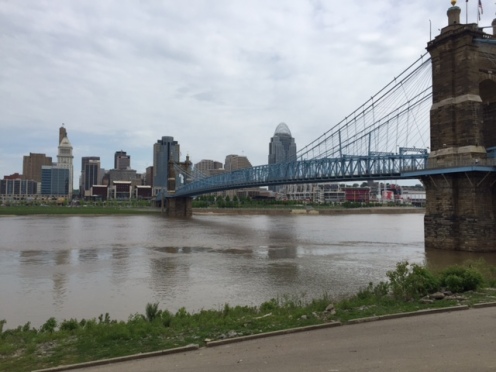 The John A. Roebling Suspension Bridge is named for the German-born American civil engineer who designed it. 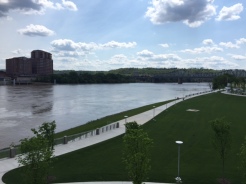 During the 19th Century, the Ohio River was part of the border between free and slave territory.

The “Sing the Queen City” 3D Art Sculpture, is the signature piece and part of the ArtWorks urban public art project known as “CincyInk.” (Photography by Brooke Hanna.)

Directly in front of me, the majestic John A. Roebling Suspension Bridge, connecting Ohio and Kentucky. Below, a grassy park and asphalt path for joggers and bicyclists. Behind me, a 3D art sculpture proclaiming “Sing The Queen City” and the National Underground Railroad Freedom Center.

Oh, how I wish I had more time at the museum. Even a 30-minute visit was educational, though. I learned more about Cincinnati’s conflicted past. Though the city served as a center for abolitionists and safe harbor for fugitive slaves able to cross the Ohio River at its narrowest points, many white Ohioans moved south during the Civil War to fight for the Confederacy, according to Ohio History Central.

A well-preserved slave pen is on displat at the National Underground Railroad Freedom Center.

There in the museum, viewing an actual slave pen (chains bolted to the floor to prevent escape) and reading of the barbaric slave trade that thrived across the river, I felt an overwhelming sadness, along with contempt for all those who participated in an economic and social structure built on the backs of men, women and children who were treated as subhuman chattel. Shame on America.

Wandering the riverfront, I was experimenting with different locations and angles for a selfie when a young woman approached and offered to take my picture. Sure, I said. She took several photos, all of which turned out nicely.

Turns out she was a professional photographer from Georgia who regularly offers to shoot pictures for tourists. Indeed, I saw her make the same pitch to a woman who was photographing her two girls. She introduced herself as Brooke and shot a quick selfie of us. A nice, random moment.

Checked into my airbnb room and briefly met my host, Ian, a high school physics teacher who lives with his dog and two cats near the University of Cincinnati. He struck me as a nice guy, but circumstances were such that we only had time for a quick hello and no sit-down conversation. 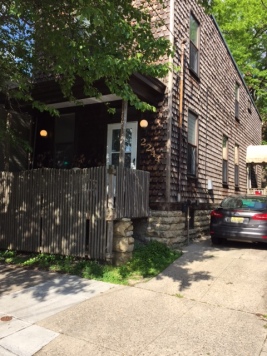 A row of townhouses bring color to Cincinnati’s Victor Street.

I headed to the ballpark to meet with Anne Saker, a talented reporter I helped recruit to The Oregonian and a bonafide baseball fan. Anne was born in Columbus, went to school at Ohio University, and is now back at The Cincinnati Enquirer, where she once worked as a college intern.

It was great to hang out with Anne, who is one of the most gracious and outgoing people on the planet. She knows her home state, her city and her hometown baseball team all very well, and it was a pleasure to talk with her about all that while swapping newsroom war stories. We traded thoughts about the past, present and future of journalism, shared baseball anecdotes, and reminisced about our shared history in Portland. Sure hope she makes it back to Oregon again.

George and Anne flank a statue of Reds great Joe Morgan, arguably the greatest second baseman of all time.

As for the ballpark, what can I say?

Like Pittsburgh and Cleveland, Cincinnati is an amazing place to see a ballgame. Great American Ball Park, GABP for short, opened in 2003 on the banks of the Ohio River. It’s equipped with a state-of-the-art jumbo scoreboard, a wide concourse featuring an actual market with chilled beverages and fresh fruit as well as the usual fare of grilled sausages, pizza and cheese coneys, a local favorite featuring the city’s signature Cincinnati Chili, onions and shredded cheese on a steamed bun and hotdog.

Adults and children alike wanted their pictures taken with storm troopers on Star Wars Night at the ballpark.

Fans had to guess which of three plates of Cincinnati Chili was hiding a baseball underneath. 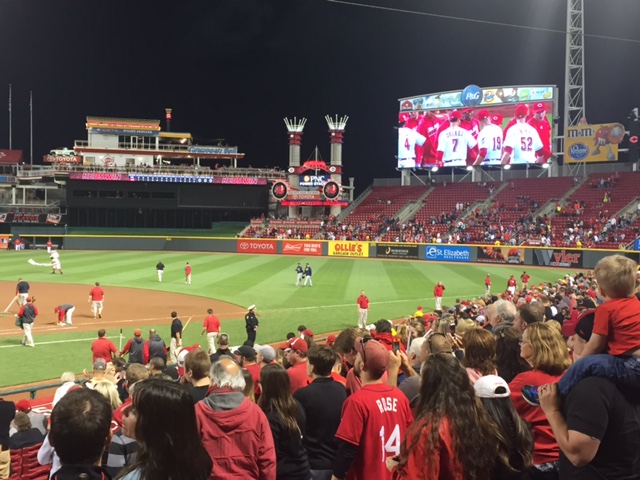 Fans celebrate a Reds’ win over the Milwaukee Brewers on May 6, 2016.

Our tickets were on the first-base side several rows up behind the Reds’ dugout. We sat in the shade on a warm night, a welcome contrast to Cleveland, where the night before the game-time temperature started at 54 and fell to 51. It was not only Fireworks Friday but Star Wars Night, so the whole Midwest vibe took on an extra layer of Disneyesque wholesomeness.

The game featured the two weakest teams in the National League’s Central Division and yet another one-sided outcome. The Reds won easily, 5-1, and fans enjoyed a post-game fireworks celebration.

On Saturday morning, I got up early, ran through the University of Cincinnati campus, checked out of my room and headed downtown for a final meal — a delicious croissant omelette with fresh fruit at the small and cozy French Cafe. 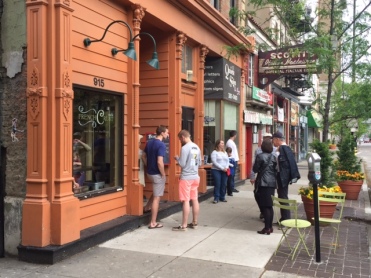 Fresh fruit and a goat cheese-asparagus-tomato omelette at French Cafe.

I crossed the Roebling Bridge into Covington, Kentucky, and admired the Cincinnati skyline, all the while aware I was looking across a body of water that separated North from South, freedom from slavery.

The Roebling Murals at the Covington Waterfront depict the history of this northern Kentucky city.

The Roebling Murals in Covington, Kentucky, are a series of 18 murals on the south shore of the Ohio River. 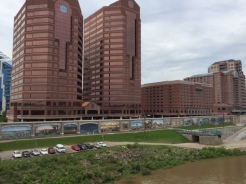 En route to the airport, which lies about 20 miles away in Northern Kentucky, I marveled at the physical beauty of the area — green, rolling hills — and soaked up the last few moments of my trip to the Midwest.

I packed a lot of activities and as many people as I could into my five-day, four-night adventure. Though the purpose of the trip was to see professional baseball in three cities separated by just a few hundred miles, I came home with new experiences, new and rekindled friendships, and a better sense of this region to add to my bank of memories.

I’d love to do it again. Next time, though, I may have to take Charlotte with me. 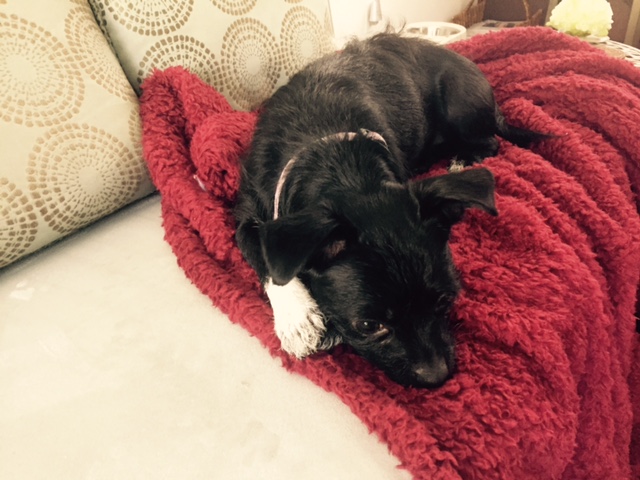 Missed my little terrier mix, Charlotte. Toward the end of the trip, my wife texted: “I think she misses you.”