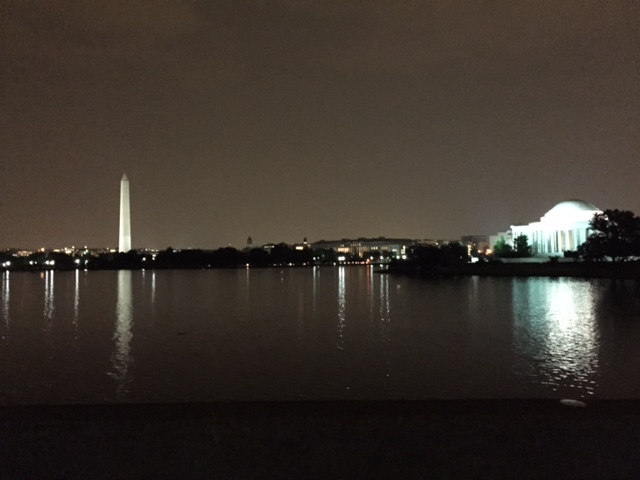 Washington Monument and Jefferson Memorial from the Tidal Basin.

For months, we’d planned our recent getaway. Our 40th wedding anniversary was on the horizon and we wanted to go somewhere new, somewhere that wouldn’t break our budget, somewhere where we could be active and not just lounge around.

Washington, D.C., might be a surprising choice to many, but we decided it made sense for us and so we signed up for a four-day bicycle tour of the nation’s capital.  The trip wrapped around the Labor Day weekend and, looking back, we agreed it was a great choice.

The tour was part of a Road Scholar package deal that included hotel, several meals, bike rentals and a guided tour of the major attractions in D.C., plus two side trips into Virginia.  Sure, we were joined at the hip to 13 other travelers, but we also had ample time for just the two of us. We also squeezed in two dinners with friends we knew from Oregon, plus two on our own.

I’d been to Washington before — lived there two summers, in fact, while I was a college intern at The Washington Post — and had returned a handful of times since then for various journalism conferences. It was Lori’s first time, though, and so for me it was fun to glimpse some familiar sights but mostly experience new ones with her, starting with seeing the city by bike.

It helped that we had a day to ourselves both before and after the tour, but even an extra day on both ends still wouldn’t have been enough to get to around to everything we would have liked. As it is, we had make some hard choices and forgo a couple things entirely, such as visiting Georgetown. All in all, though, the trip had so many nice aspects to it that it more than made up for the omissions. 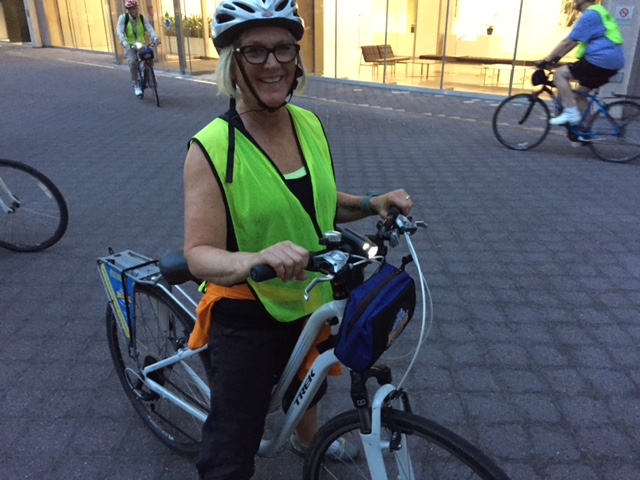 The bike tour began at dusk and finished close to 10 pm. My favorite cyclist: Lori

We agreed we’d never want to live there. Not only is it too hot and humid, but the city is crawling with tourists (yes, I realize we were among them) and that creates a sense of crowding that doesn’t feel comfortable. On the positive side, there are plenty of things to do and places to see, many within walking distance of downtown — and you can’t help but feel a heightened sense of history and patriotism. But still, nothing compares to flying back home and seeing the mighty Columbia River and all that green.

Wednesday, Sept. 2: Travel day. Up at 3:30 am to catch a shuttle flight from Portland to Seattle, then on to DC. Rode the Metro from Reagan National Airport to our hotel in downtown Washington. Safe, convenient and lots cheaper than a cab. Had a fabulous dinner at Rasika, an Indian restaurant that evidently is a favorite of the Obamas. Can you picture tandoori salmon, chicken and lamb? Best meal of the trip.

The United States Holocaust Memorial Museum is a place everyone should see.

Thursday, Sept. 3: Intended to spend a couple hours at the U.S. Holocaust Memorial Museum but it turned into five. The exhibits are so informative and tastefully presented and the content so compelling and framed with context that it was easily the most enriching experience of the trip. I expected somber — and it certainly was — but never did I feel anything was presented for its shock value. With four floors worth of photographs, videos, maps and artifacts to examine and absorb, my emotions swung from sorrow and compassion to outrage and disbelief that human beings are capable of such evil toward the vulnerable — not just Jews but homosexuals, disabled people, the Roma and Jehovah’s Witnesses.

It boggles the mind that 6 million Jews perished in the Holocaust and that World War II caused 50 million military and civilian deaths among the 31 nations involved. I could go on about the indignities and unimaginable suffering inflicted by the Nazi regime — topped off by “the final solution” — but I would only be scratching the surface. If you ever have the chance, do not miss this museum. As heartbreaking as it is, the tour ends in a quiet room where visitors can light a candle and be alone with their thoughts.

The first names of those who perished during the Holocaust are listed by country on glass panels that rise above the lobby.

That evening, our bike tour began with a ride from L’Enfant Plaza to the Tidal Basin, where we saw the Jefferson Memorial, to the west end of the National Mall, where we stopped in at the Lincoln Memorial and the Franklin D. Roosevelt Memorial. It was slow going as we strung out single file, but a nice start too as our tour guide shared interesting stories not just about the three presidents but about the construction of each of the monuments.

Friday, Sept. 4: Piled onto a bus for the short ride from DC to Alexandria, where the city’s Old Town makeover is both stunning and a little scary. Multi-million dollar waterfront condos and a former munitions factory that’s been transformed into a gallery of art shops epitomize the area’s gentrification.

We clambered onto our bikes for what was billed as a two-hour, 10-mile ride to stately Mount Vernon, the official residence of George Washington. We made it easily in 90 minutes and it was far and away the best two-wheel experience of the tour. Riding along the Mount Vernon Trail on the west bank of the Potomac River, you pass through leafy forests, cross wooden bridges, catch a glimpse of well-maintained residential housing — all while treated to beautiful views of the water. 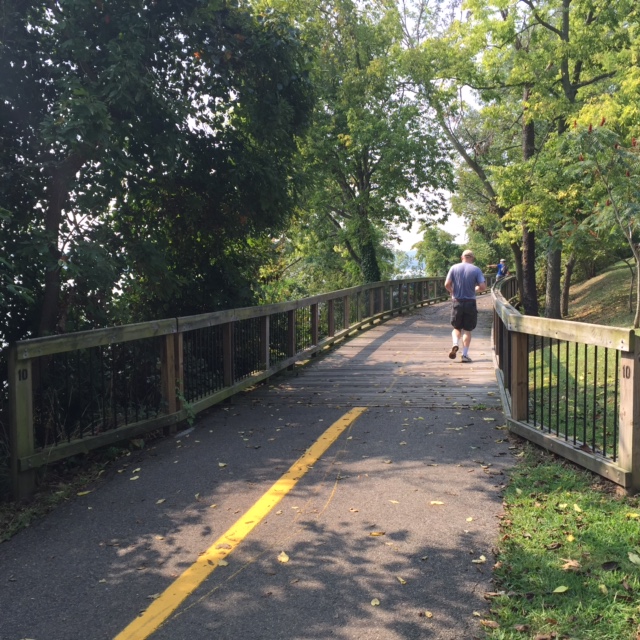 The Mount Vernon Trail stretches for 18 miles from Washington to the Virginia suburbs along mostly flat terrain with occasional rolling hills.

The trail ends with a steady climb (strenuous for some riders, but not much of a challenge for us) that leads into a parking lot. From there, it’s a short walk to the visitors center, featuring shops and a food court that both, mercifully, were  air-conditioned.

A marker indicates where dozens of slaves were buried on the grounds, not far from George and Martha Washington.

George and Lori at the Mount Vernon estate with the Potomac River in background.

Had ample time to tour the presidential mansion and the grounds on which it sits, viewing a flower garden, livestock pens, and outbuildings from which various household and agricultural services were provided to the president and his guests. We saw a sanitized reproduction of slaves’ quarters and a memorial grove marking their graves — welcome gestures considering our first president and his wife both relied on and profited from slave labor.

Had an afternoon boat ride back to Alexandria, which gave us a chance to learn more about the Potomac and its role in the history of Virginia and Maryland as well as the District of Columbia. I would have been fine cycling back to Alexandria but, really, who am I to complain about a leisurely ride on the water?

Lori with our excellent tour guide Tujon Gallagher, a history major at Georgetown and a longtime resident of the district.

Made it back to DC with enough time to meet friends for dinner in the Adams Morgan neighborhood of Northwest Washington. It was a great time with former Oregonian reporters Angie Chuang and Tracy Jan, now both working and living in the capital. Angie is a tenured associate professor of journalism at American University. Tracy is a Washington bureau reporter for The Boston Globe. I recruited both to Portland and have taken immense satisfaction in seeing their careers ascend.

We ate at Mintwood Place, a trendy little place that evidently is another favorite haunt of Michelle and Barack. Clearly, they have good taste.