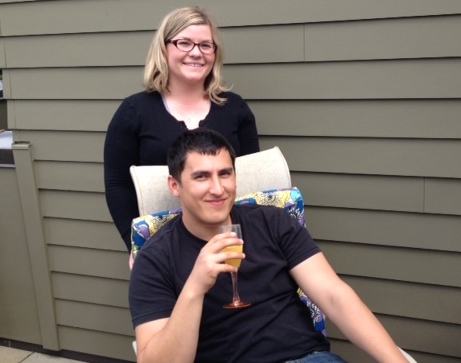 Every once in a while, someone says something about one of your kids that makes you burst with pride. That happened yesterday and it gave Lori and me a sense of how others see our youngest child.

With apologies for parental bragging, here’s the story.

Jordan was in touch with us recently to ask if he could borrow one of my suits for an awards program he was asked to attend at the small liberal arts college where he was completing the end of his sophomore year.

Sure, we said. What’s the award?

He said he didn’t know much about it and we figured we’d find out more when he and his wife Jamie came down to visit for Mother’s Day.

We got a little more information that day, but not much. That’s not surprising, though, because Jordan is exceptionally modest about his accomplishments. I took it upon myself to write to a couple of folks at the college and got the details in an email from the chairman of the chemistry department.

Turns out that Jordan was selected as the outstanding student in general chemistry. His overall performance placed him at the top of all students in the two-course sequence and resulted in his being recognized as winner of the 2015 CRC Press Chemistry Achievement Award for Saint Martin’s University.

The annual award is sponsored by a subsidiary of the Chemical Rubber Company and comes with two components. The winner receives a copy of the “Handbook of Chemistry and Physics,” a massive 2,500-page reference volume used by scientists all around the world containing the latest in chemical, physical and mathematical information. A “bookplate” with the student’s name and school is affixed to the inside cover of the handbook.

No wonder Jordan needed a suit for the evening. And no wonder Lori and I were shaking our heads in appreciation of how far our boy has come since high school.

After all, this is the guy who passed up a full-ride ROTC scholarship out of high school because he was burned out on the classroom. He came home, worked for a while and took community college classes while he thought about what he wanted to do. He enlisted in the Army at 21, got married, served in Afghanistan and completed his four-year enlistment. He and Jamie bought a home near the military base where he was stationed outside Tacoma, Washington, and he enrolled in college at age 25.

Two years later, here he is: a Dean’s List student four semesters in a row, and a biology major who’s just won a prestigious award for chemistry. This summer, he’ll do a 10-week research fellowship in cellular and molecular biology at Marquette University in Milwaukee, Wisconsin, working under the supervision of a faculty mentor.

All of that is amazing and inspiring, but here’s the best part.

In the email that Dr. Darrell D. Axtell wrote me yesterday, he said this:

As Jordan’s instructor in Chemistry this past year, and as the person responsible for determining the award in question, I am more than happy to provide you some information about Jordan’s award. But first, I would like to say that it has been a great pleasure to have Jordan in my class this year….he is a hard worker, unafraid to ask (or answer) questions in class, well-received by his classmates, and one of the finest young men I have had the privilege of knowing throughout my career.

We have always been proud of Jordan — as well as his brother and sister, of course. In this case, the chemistry award says so much about his native intelligence and capacity to focus on difficult material. Beyond that, the professor’s comments about his personal qualities absolutely make my heart sing.

Jordan is now halfway through his undergraduate studies. Already, I’m anticipating being there at graduation in a couple of years and after that, seeing where graduate school takes him.